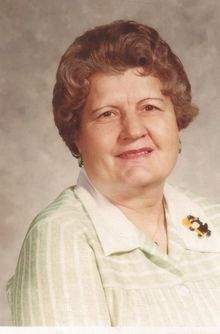 
Agnes Louise Cox, age 94 of Canaan Township, passed away Friday morning March 2, 2012 in Riverside Methodist Hospital, Columbus. Agnes was born August 3rd, 1917 in Champaign, Illinois the daughter of the late Charles & Martha (Meyers) Lemke. On January 30th, 1940 she married Joseph Cox and they made a home together for 46 years until his death in 1986. Agnes was a faithful member of the Canaan United Methodist Church . She was employed for many years as a cook at River Valley High School. She had a rather extensive collection of Candle lanterns and would collect anything that had to do with Holstein Cattle. She was a faithful friend and a loving mom & grandma. Agnes leaves behind her son Gerald Cox of Edison and her grandchildren Brian Cox, Michele (Joey) Coleman and Trisha (Randy) Wright, all of Avon Park, FL. Stacey Cox of Columbus and Nathan Cox of Edison. There are six great grandchildren to cherish her memory and a niece and nephew. Agnes was preceded in death by four brothers and two sisters.
Funeral Services for Agnes will be held at 11:00 on Tuesday March 6th , 2012 in the Timson Allen & Melroy Funeral Home in Caledonia with Pastor Matt Skelton officiating. Interment will follow in Caledonia Cemetery. Friends may call at the funeral home on Monday where the family will receive them from 2 - 4 and 7 - 9. Memorial contributions may be made to the Canaan United Methodist Church.

To order memorial trees or send flowers to the family in memory of Agnes Cox, please visit our flower store.