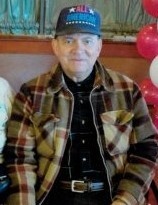 Almon Lowell Somerlot, age 86 of Martel, died August 19th at Marion General Hospital. He was born April 04th, 1933 in Martel as the son of the late Almon E. and Elva (Wright) Somerlot. Almon was born, raised and lived his entire life at his address on Martel Road. Almon loved his Chevy automobiles. Almon is survived by his first cousin, Norman Loyer of Cardington and many second cousins. He was preceded in death by a half brother Howard Johns. A graveside service at Caledonia Cemetery will be held at 10:00 A.M. on Thursday, August 22nd 2019 with Everett Douce officiating. In lieu of flowers, Memorial Contributions may be made to the Martel United Methodist Church.

To order memorial trees or send flowers to the family in memory of Almon Somerlot, please visit our flower store.