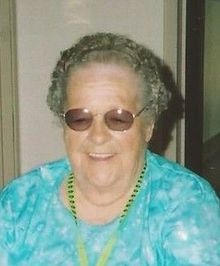 Barbara E. Ehrhardt, age 92 of Marion passed away Monday December 22nd, 2014 at Riverside Hospital in Columbus, Ohio. She was born in Brewer, Maine January 3, 1922 as the daughter of the late Henry W. and Mina Grace (Bickford) Severance. Barbara was once employed as a meat processor for over 20 years at Rice & Co. in Bangor, Maine. She enjoyed crafts, needlework, camping and playing Bingo with the girls at Brownstone. She was a faithful member of the Apex Church in Marion. In 1942 she married Raymond Ehrhardt who preceded her in death in 1994. Barbara is survived by her son-in-law Clyde Chatfield of Caledonia, grandchildren; Raymond (Diana) Chatfield of Marion, Tammy Chatfield of Caledonia, Barbara Morris of Carey, great grandchildren; Collin Apt of The United States Marine Corp., Erica Chatfield of Mt. Gilead, Michael Chatfield of Mt. Gilead, David Shoaf of Texas and one great great grandchild, Destler Chatfield. Barbara also leaves behind her two nieces Rebecca Robinson of Maine & Moureen Hawkins of South Carolina. She was preceded in death by her daughter Katrina Chatfield, two brothers, Ralph Severance & Quentin Severance and two sisters, Olive Ellis & Mina Boudanza. Services for Barbara will be held on Saturday December 27th at 11:30 A.M. in the Timson Allen & Melroy Funeral Home at 407 S. Main Street in Caledonia, Ohio. Interment will follow in Caledonia Cemetery. Friends may call at the funeral home on Friday from 6-8 P.M. Memorial Contributions may be made to St. Judes and the Disabled Veterans of America.

To order memorial trees or send flowers to the family in memory of Barbara Ehrhardt, please visit our flower store.