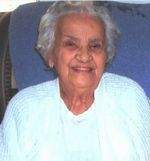 Betty J. Berry age 84 of 366 N. Murray Hill , Columbus, 43228 passed away Thursday afternoon February 11th, 2010 at the Regency Hospital of Columbus following an extended illness. Betty was born in Marion on August 25th, 1925 as the daughter of Chesney & Elizabeth (Hoover) Gorenflo. On March 27th, 1944 she married William G. Berry Jr. He preceded her in death on July 23rd, 2001. Betty was employed by General Motors Columbus Division for 25 years. She was a member of Lodge 2236, Loyal Order of Moose in Hilliard and the United Auto Workers. In her younger days she was a member of Fife Memorial Baptist in Marion. Her family and activities with them was the center of her life whether it was camping or just sitting on the porch. She is survived by her son and daughter-in-law Greg & Sue Berry of Hilliard and her daughter Carol Byrd of Columbus. She is also survived by her daughter-in-law Carol Berry of Columbus. Five grandchildren and eleven great grandchildren. She is also survived by her sister Dorothy Cluff of Columbus and her two brothers Robert Gorenflo of Green Camp and William Gorenflo of Columbus. She will be remembered and missed by her many nieces and nephews. She preceded by one brother and her son William G. (Bear) Berry III. Funeral Services for Betty will be held at 12:00 Monday February 15th at the Timson Allen & Melroy Funeral Home in Caledonia with Pastor John Grimm officiating. Interment will follow in Caledonia Cemetery. . Friends may call at the Funeral Home in Caledonia on Monday from 10:00 until time of service. Memorial contributions may be made to the Loyal Order of Moose.

To order memorial trees or send flowers to the family in memory of Betty Berry, please visit our flower store.