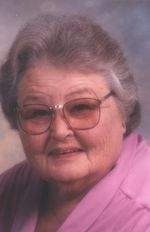 Betty Joan Clutter age 79 of Caledonia passed away Monday evening Febuary 1st, 2010 in Partners of Marion Rehabilitation & Care Center where she had resided for the past week. She was born November 5th, 1930 in Caledonia, the daughter of the late Shirley E. & Geneva B (Landes) Cain. On July 21st, 1951 she married Ivan L. Clutter in San Diego. He preceded her in death December 20th, 2001. Joan was a graduate of Caledonia High School and was employed by J.C. Penney of Marion during the 1960s. She enjoyed oil painting, crocheting , hooking rugs and was very good at sewing. She always enjoyed her winter home in Frostproof, Florida. Joan is survived by her son Larry Clutter of Caledonia and her daughter and son -in-law Karen & Leo Buyer of Marion. She will also be remembered by seven grandchildren and nine great grandchildren. She will also be missed by her brother James Cain of Fremont . She was preceded in death by her son Gary, five brothers and one sister. Funeral Services for Joan will be held on Friday February 5th, 2010 at 11:00 in the Timson Allen & Melroy Funeral Home in Caledonia with Kenneth Boswell officiating. Interment will follow in Caledonia Cemetery. Friends may call at the funeral home on Thrusday from 2 - 4, 6 - 8. Memorial contributions may be made to the Central Ohio Breathing Association

To order memorial trees or send flowers to the family in memory of Betty Clutter, please visit our flower store.