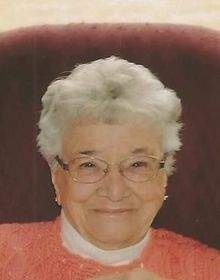 
Betty June Shelton, age 87 of Caledonia passed away unexpectedly Saturday afternoon November 16th, 2013 in Marion General Hospital. She was born in Marion on October 8th, 1926 as the daughter of the late Charles & Olive Evangeline (England) Eckard. On April 21st, 1946 she married Carl "Dick" Shelton. He preceded her in death on September 08th, 2005. Betty took great pride in being homemaker. She enjoyed cooking for all her relatives and was a noted seamstress. In the period where she was employed elsewhere, she had worked for the Union Department Store in Mt. Gilead, Woodside Village and had been a cook at the Cherry St. School in Mt. Gilead. Later in life she enjoyed getting together with a group that called itself "Thursday's Girls" at the Colonial House in Marion. Betty will be sadly missed by her daughters, Sherry Casto of Cardington and Karen Jones of Caledonia. She also leaves behind her grandchildren, Chris ( Michelle) Casto of Concord Twp, OH, Chad (Lynda) Casto of Dayton, Faith (Darroll) Kunze of Mt. Gilead, Aaron (Carmen) Casto of Cardington and Belynda (Jake) Schuman of Cardington. There are Thirteen great grandchildren. Betty's memory will be cherished by her brothers, Warren Eckard of Hilliard, Richard Eckard of Marion, Thomas Eckard of Marion and her sister Judy Hickok of Marion. She was preceded in death by six brothers and eight sisters , her grand daughter Heather Jones and her son-in-law Garry Casto. Funeral services for Betty will be held on Friday November 22nd, 2013 at 1:00 P. M. in the Timson Allen & Melroy Funeral Home in Caledonia. Interment will follow in Caledonia Cemetery. Friends may call at the funeral home on Thursday where the family will receive them from 6-8.

To order memorial trees or send flowers to the family in memory of Betty Shelton, please visit our flower store.