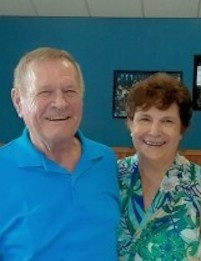 Billy "J" Murray Jr. age 74 of Caledonia passed away Friday, January 25th, 2019 at the James Cancer and Solove Research Center. Bill was born September 15, 1944 in Marion, Ohio to the late Billy "J" Sr. and Etta Boone Murray. He married Barbara Kaelber July 14, 1968 and she survives him at home. Bill was a Marion Harding High School graduate and attended and completed the Criminal Justice Program at NCTC. He was a U.S. Marine Corps Veteran where he proudly served and received his sharpshooter commendations. Bill retired after many years from OPOTA as a field agent and was a former Asst. Police Chief from the Marion Police Department. Bill was a member of the Oliver Lodge #447 F & AM of Caledonia, The Valley of Columbus - Scottish Rite, Steve Young F.O.P. and The Memorial United Methodist Church of Caledonia. When Bill wasn't spending time with family, he loved riding around on his Kubota, collecting Eagle statuary and coins. Bill was an avid Amazon Prime Shopper and enjoyed spending time in the garden. He loved to travel as long as it was in the states and not on a boat. Bill and Barb also helped out on the family farm when needed and took care of the livestock. Billy will be sadly missed by his children, Karen Seckel of Caledonia and Krista (Matt) Johnson of Marengo, his grandchildren, Trisha, Mitchel and Charlie Seckel, Wyatt, Troy and Paige Johnson and his brothers Kerr (Sharon) Murray of Marion and George (Barb) Marion. He was preceded in death by his a sister Dora Wilson and a brother Melvin Murray. Funeral Services for Bill will be held at 11:00 A.M. Thursday, January 31st, 2019 at the Timson & Melroy Funeral Home in Caledonia with Pastor Tom Orr and Terry Burkhardt officiating. Interment will follow in Caledonia Cemetery ON FRIDAY FEBRUARY 1ST AT 11:00 . Friends may call at the funeral home on Wednesday, January 30th from 2 - 4 and 6-8. Memorial contributions may be made to the Steve Young F.O.P. or The Memorial United Methodist Church. Online condolences may be expressed to the family at www.timsonmelroy.com.

To order memorial trees or send flowers to the family in memory of Billy Murray, please visit our flower store.