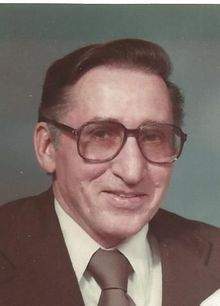 Blaine Richard Cochran, age 84 of Marion, passed away early Sunday morning November 3rd, 2013 in Kingston of Marion where he had been a resident for the past five years. He was born in Morrow County on September 23, 1929 as the son of the late George Washington and Mary (Wolfe) Cochran. On September 11th, 1952 he married the former Ruth Roach and she survives him. Blaine is a U.S. Army veteran of the Korean Conflict. He was employed by Eaton Corporation for 39 years as a machinist. He had a life-long interest in collecting coins and stamps.
Besides his wife, Mr. Cochran is survived by two sons. Blaine (Janet) Cochran of Edison and Brother Michael Cochran of Saint Vincent's Monastery of Latrobe, WI. He is also survived by his brother George of Edison and his sisters Betty Berridge of Marion, Mary June Miller of Marion, Darlene Blasinski and Beulah Deeds of Texas and Linda Shingler of South Carolina. He was preceded in death by five brothers and five sisters. The family would like to thank Acclaim Hospice and Kingston of Marion for the care and consideration shown to their loved one, Graveside services for Mr. Cochran will be conducted at 2:00 P.M. Friday November 8th in Caledonia Cemetery by The Marion County Veteran's Council. Friends may call at the Timson Allen & Melroy Funeral Home in Caledonia from 12:45 until 1:45 on Friday. Memorial contributions may be made to the Disabled Veterans of America.

To order memorial trees or send flowers to the family in memory of Blaine Cochran, please visit our flower store.