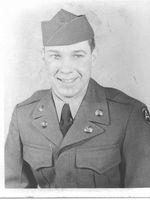 Charles W. Shelton, age 79 of Bucyrus, passed away Monday afternoon March 2nd, 2009 in the Cleveland Clinic. He was born December 31st, 1929 in Akron, Ohio the son of the late Wattie B. & Leatha (Baker) Shelton. A U.S. Army veteran of the Korean Conflict, Charles obtained the rank of Sergeant First Class while serving over seas and was a recipient of the Purple Heart. On February 20th 1954 he married the former Barbara Soulier and they remained together until December 19th, 1987 when Barbara passed away. In 1989 he married Marjorie Williams. She preceded him in death in May of 2000. Charles was an employee of Swan Hose in Bucyrus for 47 years. He was a member of the Am Vets, American Legion, VFW and Moose; all in Bucyrus. Charlie loved his home on Lake Erie and enjoyed nothing better than sitting in his boat and fishing for anything that would take the hook. He also enjoyed woodworking and cutting grass. In his earlier days he was an avid bowler. He will be dearly missed by his daughter Vicky (Ronald) Van Houten of Bucyrus; his step-daughters, Deborah (Glen) Feichtner & Dawn (John) Wood also of Bucyrus. Two Grandsons; Jeremy (Dawn) McAdams & Jesse D. Davis and his fianc� Jamie Treisch. Three step grandsons, Tony (Darlene) Van Houten, David (Amy) Tuck & Tim (Amy) Wood. Three Step grand daughters; Monica (Sam) Bess, Marie (Nate) Frey & Angela Wood; all of Bucyrus. Four great grandchildren and two step great grandchildren. He is also survived by his brother Howard Shelton and sister Clara (Don) Harriman of Marion. He was preceded in death by his brother Dick and step-son Dennis Williams. Services will be conducted on Friday March 6th, 2009 in Caledonia Cemetery at 1:00 in the afternoon with Kenneth Boswell officiating. Military honors will be paid by the Bucyrus American Legion. Friends may call at the Timson Allen & Melroy Funeral Home in Caledonia for two hours prior to the time of the service. Memorial Contributions may be made to the American Diabetes Association. Online condolences may be expressed to the family at www.timsonallenmelroy.com.�

To order memorial trees or send flowers to the family in memory of Charles Shelton, please visit our flower store.