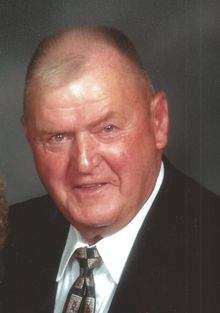 Charles E. Valentine,, age 83 of Caledonia passed away Thursday afternoon, September 27th at home. He was born in Tully Township as the son of the late George F. & Olah E. (McClure) Valentine. On September 2, 1950 he married Donna M. Johnson and she survives him at home. Charles was a 1947 graduate of Martel High School, he was employed by the Erie, Erie - Lackawanna and ConRail Railroads for Forty Three years and three months before his retirement. Mr. Valentine was a member of the Lee Street Presbyterian Church, He was secretary for the local chapter of the Maintenance of Way Brotherhood for many years. He also farmed for most of his life. He enjoyed gardening and loved to go fishing and boating up on Lake Erie. He was a stalwart Ohio athletic fan whether it was the Indians, Browns or the Buckeyes, but he loved watching his grandkids in their activities more than all the rest. Besides his wife, Charles leaves behind his son and daughter-in-law George & Pam Valentine of Caledonia, his daughter and son-in-law Lori and Ken Shuster III of Caledonia. He leaves behind his grandchildren, Clinton & Robert E. Valentine of Louisiana, Rob & Chad Valentine of Marion, Kenny, Kelly & Kayla Shuster of Caledonia, Katrina McFarland of Williamsburg, OH and Karianne Maniaci of Marion. There are fourteen great grandchildren and one great great grandchild. He also leaves behind his sisters, Mrs. Mildred Woolum of Martel and Mrs Gladys (George) Johnson of Marion. Charles was preceded in death by one brother George and his children Robert E. Valentine in 1974 and his daughter Cynthia K. Albright in 1997. Funeral services for Charles Valentine will conducted at 2:00 PM Monday October 1st at the Timson Allen & Melroy Funeral Home in Caledonia with Pastor Daniel Turner officiating. Interment will follow in Caledonia Cemetery. Friends may call at the funeral home on Sunday from 1 - 4. Memorial Contributions may be made to the Homecare Matter Hospice of Galion. Marion

To order memorial trees or send flowers to the family in memory of Charles Valentine, please visit our flower store.