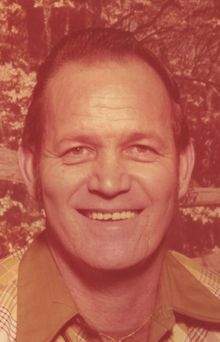 Charlie Leander Lambert, age 76 of Upper Sandusky, passed away Friday March 15th, 2015 in Wyandot Memorial Hospital in Upper Sandusky. He was born in Raven, Virginia on March 5th, 1938 as the son of the late Jesse & Annie Bell (Jones) Lambert. Charlie was a welder by trade and was employed by Slob & Son Welding for 30 years. He retired in 2000. Charlie was very proud of his Native American heritage as a member of the Cherokee Nation. He often attended the Mt. Blanchard Pow Wow and was the organizer of a Tomahawk throwing club in Upper Sandusky. He was also member of the Sons of the AMVETS. On May 23rd, 1970 he married the former Lois Hunt . Lois precede him in death on April 24th, 1995. On July 16th, 2001 he married the former Martha Phillips. Martha survives him at home. Charlie is also survived by his daughter Annie Bell Lambert of Marion; Step Son Ernest Gwinner of Marion and Step-daughters Christina Creamer of Caledonia and Marcy Lynch of Carey. Eight grandchildren and many great grandchildren. He is also survived by two sisters, Biddie Pruitt of Raven, VA and Cora Lee Adkins of Bluefield, WV. Charlie was preceded in death by a step-son Richard Hunt and step daughters Cherie Wall and Steffaney Edwards. Three brothers and two sisters.
Funeral Services for Charlie Lambert will be conducted on Tuesday March 25th at 11:00 A.M. at the Timson Allen & Melroy Funeral Home in Caledonia with Kenneth Boswell officiating. Interment will follow in Caledonia Cemetery. Friends may call at the funeral home on Monday from 6:00 until 8:00. Memorial contributions may be made to the Alcoholics Anonymous.

To order memorial trees or send flowers to the family in memory of Charlie Lambert, please visit our flower store.