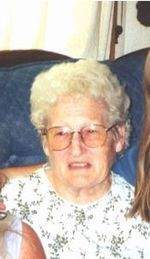 Cleo Virginia Heffley, age 88 of Caledonia passed away Wednesday evening December 16th, 2009 at home. She was born November 29th, 1921 in Marion County, the daughter of the late Neal & Gladys (Houk) Wood. On December 24th, 1941 she married John Heffley. He preceded her in death in 1978. Cleo was a 1939 graduate of Green Camp High School. From the time of their marriage until 1969 Cleo assisted John in the running of their Dairy Farm near Delaware. She was a sales clerk at Crawbaugh's hardware in Marion for about 10 years. Around Caledonia Cleo was known as the "Flower Lady" because of her beautiful flower beds and her ability to make anything grow. Her children and grandchildren were her life. Mrs. Heffley is survived by her daughter and son-in-law Sue & Rex Dennis of Marysville, Sons & daughter-in-laws John Michael & Rita Heffley of Buford, GA, George Heffley of Maryland and Jeff & Karen Heffely of Caledonia. Grandchildren; Gregg, Doug, Steve, Rebecca, Lisa & Lori, Diana & Ginny, John, Sam & Jenny. 16 Great Grandchildren and 4 Great Great Grandchildren.
She was preceded in death by 3 brothers and 1 sister.
Funeral Services for Cleo will be held on Monday December 21st, 2009 at 10:30 in the Timson Allen & Melroy Funeral Home in Caledonia with Pastor Joseph Platt officiating. Interment will follow in Caledonia Cemetery. Friends may call at the funeral home on Sunday where the family will receive them from 2 - 4. Memorial Contributions may be made to the First Consolidated Emergency Squad or Home Health Matters Hospice.

To order memorial trees or send flowers to the family in memory of Cleo Heffely, please visit our flower store.