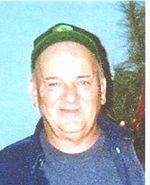 Danny W. Brooks age 61 Formerly of Caledonia passed away at 4:51 A.M. January 21st, 2008 at St. Ann�??s Hospital, Westerville. He had been a resident of Heartland of Centerburg for the past year. Danny was born in Galion on February 13th, 1946, the son of the late Ralph and Dorothy (Bayles) Brooks. He was a U.S Army Veteran having served in Vietnam. A auto mechanic by trade, Danny loved NHRA Drag Racing. He loved to be outdoors and had quite an affection for cutting grass. Danny leaves behind his daughter and son-in-law Angel & Josh Welsh of Caledonia. His two Grandsons; Preston & Carson Welsh. of Caledonia. He is also survived by his brother Virgil Brooks of California and his former wife Toni Hill of Caledonia. Graveside Services conducted by the Marion County Veterans Council will be held a 2:00 P. M. Wednesday Jan 23rd in Caledonia Cemetery . Calling Hours will not be observed. Timson Allen & Melroy Funeral Home of Caledonia is in charge of arrangements. Online condolences may be expressed to the family at www.timsonallenmelroy.com .

To order memorial trees or send flowers to the family in memory of Danny Brooks, please visit our flower store.