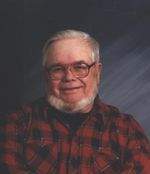 David Carle Pugh
David Carle Pugh age 82 of 400 Delaware Ave Apt 522, Marion, passed away Sunday afternoon July 22nd, 2007 at Marion General Hospital . David was born in Athens, Ohio on January 13th, 1925, the son of the late Cecil C. & Charlotte Agnes (Davids) Pugh. He attended Kirkpatrick Public School for the first eleven years of his education and graduated from Marion Harding High School in 1940. Between his junior and senior year he attended the American Legion of Ohio Buckeye Boy's State. Following high school he was employed at the Scioto Ordnance Plant for three years. For most of his life David was a Scott Township farmer. He was an active member of the National Farmer's Organization, The National Rifle Association and the Kirkpatrick Church of Christ. He was a man of many interests; he was an accomplished violinist, had an extensive collection of Indian artifacts, he loved the Cleveland Indians and enjoyed riding bicycles & motorcycles all over the state. He was a member of the Tailwinds Bicycle Club in Marion. David was a good friend and neighbor to the folks in Marion Towers. He was always ready to run errands or do favors for anyone needing help. David is survived by Nancy A. (Claffey) Pugh his wife of 55 years. He is also survived by his children: Beverly Ann & Bill Smith of Marion, Nancy Beth & Edward Mack of Delaware, Robert Carle Sr. & Laurie Pugh of Marion, David Christopher Pugh of Marion and Duane & Carmen Tschanen of Dayton. Sixteen grandchildren and eleven great grandchildren. He is also survived by his brother Chauncey D. Pugh of Marion. Funeral Services for David C. Pugh will be held at 1:00 P. M. Thursday July 26th, 2007 at the Timson Allen & Melroy Funeral Home in Caledonia with Kenneth Boswell officiating. Interment will follow in Marion Cemetery. Friends may call at the funeral home where the family will receive them between the hours of 2 - 4 & 7 - 9. Memorial Contributions may be made to the Multiple Sclerosis Society. Online condolences may be wished to the family at www.timsonallenmelroy.com .

To order memorial trees or send flowers to the family in memory of David Pugh, please visit our flower store.