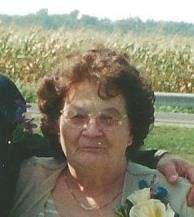 Doris Virginia Stayner, age 85 of Marion passed away Friday evening August 08, 2014 at Kindred Nursing & Rehabilitation Center of Marion. She was born in Cardington on March 17th, 1929 as the daughter of the late Carl & Frances (Berringer) Walter. On June 2nd, 1962 Doris married Carold Stayner and shared his life as they raised their family and tended to the Dairy until Carold passed away in 1991. Doris was noted for being a great cook. Her specialties were canned pickles and Strawberry Jelly. She loved to do crossword and jigsaw puzzles. She collected special addition Barbie Dolls and Coca Cola Memorabilia. She loved to watch OSU basketball. Above all else Doris was a strong, supportive mother and grandmother. Her memory will be cherished by her children; Robert Stayner of Marion, David & Melissa of Edison, Michael Stayner of Florida, Ralph & Cathy Stayner of Edison, Richard Stayner of Caledonia, Linda & Merrill Miller and Janet & Bill Evans of Marion. She is also survived by nineteen grandchildren, twenty-five great grandchildren and three great great grandchildren. She also leaves behind her brother Clarence (Shirleen) Walter of Ontario and sister Helen Bricker of Mt. Vernon. She was preceded in death by a brother, her grandson Aaron and great grandson Blake. Funeral services for Doris will be conducted by Rev. David Lippert on Wednesday August 13th, 2014 beginning at 1:00 at the Timson Allen & Melroy Funeral Home in Caledonia. Interment will follow in Caledonia Cemetery. Friends may call at the funeral home on the same day as the service from 11:00 until 1:00. Memorial Contributions may be made to the Alzheimer's Association, American Cancer Society or Heartland Hospice..

To order memorial trees or send flowers to the family in memory of Doris Stayner, please visit our flower store.