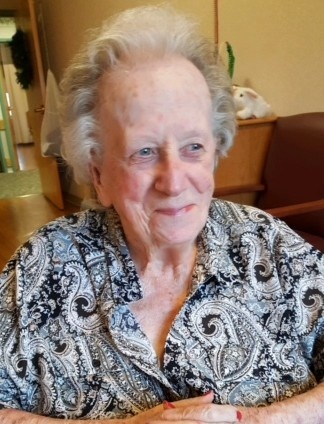 Dorothy Mae DeLong, age 95 of Marion passed away Wednesday evening May 2nd, at Heartland of Marion. Dorothy was born July 1st, 1922 in Ashland County as the daughter of the late William H. Doup and Melissa M. Marshall. On March 4th, 1946 Dorothy married Donald G. DeLong. He preceded her in death in 1991. Dorothy was employed at Shellmor in Mount Vernon during WW II. Shortly after marriage Dorothy & Donald moved to Climax where they lived for forty years. Dorothy was a former member of the Climax Community Club. After moving to Marion she became a volunteer at Marion General Hospital. In their free time they liked traveling to area County Fairs and other Ohio festivals. Dorothy loved canning and well known for her pies. She was a major fan of Ohio State University Football and Basketball. But above all else Dorothy was a dedicated mom and grandma. She will be long remembered by her sons, Ronald (Tydie) DeLong of Caledonia and Robert DeLong of Galion. Her memory will be cherished by her grandchildren, Angie (Tony) Perkins of Lewis Center and their children Cody & Brock, Kim DeLong of Marion, Chad (Carie) DeLong and their children Madison & Miley. Dorothy was preceded in death by her daughter-in-law Jane DeLong, her brother George Doup, her sisters: Aleta Kirkpatrick, Edna Crowner and Betty Brennshahl. The DeLong Family would like to offer their sincerest thank you to the Staff of Heartland of Marion for making Dorothy's final years so comfortable. Especially her special angel Cheryl McCann. Funeral services for Dorothy will be held 1:00 P. M. Monday May 7th, at the Timson & Melroy Funeral Home in Caledonia with David Braxton officiating. Interment will follow in Caledonia Cemetery. Friends may call at the Funeral Home on Monday where the family will receive them from 11:00 A.M. until 1:00 P. M. Memorial Contributions may be made to the Caledonia Church of Christ,

To order memorial trees or send flowers to the family in memory of Dorothy DeLong, please visit our flower store.