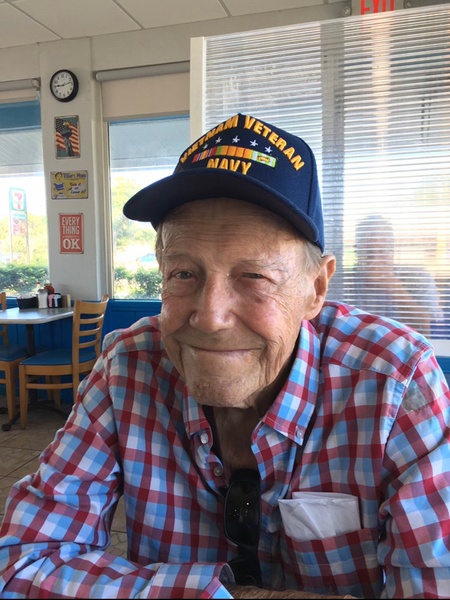 Douglas E. Cochran, age 81 of Tampa, FL, formerly of Caledonia, OH, passed away Tuesday, May 31st at the James A. Haley Veterans' Hospital in Tampa, FL. Doug was born June 8th, 1940 in Marion, OH as the son of the late Joshua “Jack” and Rhea (Cardiff) Cochran. Doug was a graduate of Caledonia High School and attended business college in Columbus. Later in his life, he earned an Associate degree in Computer Science. Doug served in the United States Navy on the USS Paul Revere in the Vietnam War, running communication lines from ship to shore. After his time in the service, he worked at GTE in Marion. Throughout his life, he worked in many other fields such as carpentry and computer repair. More recently, Doug worked as a tax preparer for H&R Block. Doug was a member of the Caledonia Memorial United Methodist Church and the American Legion Post 401 in Caledonia and Post 152 in Tampa. Doug enjoyed being outdoors, gardening and visiting Busch Gardens. He liked to fish, watch westerns, and walk his loyal dog Scooby. Most of all, Doug loved his family and spending time with his grandchildren. Doug is survived by his daughter Michele (Robert) Elrod, grandchildren Brooke and Jakob, sister Diane Hildreth and many nieces and nephews. He was preceded in death by his beloved sister Mary Lou Ellison and his best friend/brother in law Virgil Hildreth. Friends may call at the Timson & Melroy Funeral Home June 22nd from 11:00-12:00. Memorial Service will begin at 12:00 with Amy Barr officiating, inurnment to follow in Caledonia Cemetery.

To order memorial trees or send flowers to the family in memory of Douglas "Doug" E Cochran, please visit our flower store.