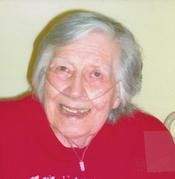 Edith Otna Bale age 90 of Marion passed away Saturday morning February 12th at Marion Pointe Nursing Care Facility. She was born January 4th, 1921 in Cove, Arkansas the daughter of the late Joe & Polly (Barker) Miller. Edith spent an extended period of her life in California where she worked and retired from the Burroughs Corporation as a wiring harness assembler. After retirement she came to Ohio to be closer to her family. Edith loved to cook and sew and enjoyed doing jigsaw puzzles. She is survived by her son Paul W. Bale of Marion and her daughter-in-law Patricia whom she always regarded as a daughter. She is also leaving behind her grandson Cary S. Bale of Marion, her great grandchildren; Carie Faye Bale, Raven LeAnn Bale - Mooney, Devan T. Bale, Levi T Bale, Owen D. Bale Colton Jereme Bale - Mooney. She also leaves her surviving brother Joe Miller in California. She had several nieces & nephews in California and Idaho and many special friends in Idaho and Marion that she thought of as family including Margaret Crawford of Marion. She was preceded in death by her brother Clinton Miller, her sister Erma Moore and an infant brother. Friends may call at the Timson Allen & Melroy Funeral Home on Monday when the Family will receive the between 6:00 and 8:00. A private burial will take place on Tuesday in Claridon Cemetery. In lieu of flowers memorial contributions may made in care of funeral home.

To order memorial trees or send flowers to the family in memory of Edith Bale, please visit our flower store.