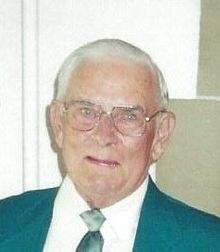 
Eugene Showers, age 88 of Caledonia passed away Friday afternoon Fen 22nd, 2013 in Marion General Hospital. He was born June 22nd, 1924 in Marion County as the son of Francis and Orpha (Seckel) Showers. On November 22, 1947 he married the former Norma Weston and she survives him at home. Gene was a Marion County Farmer for his entire life. He enjoyed a good joke and will be long remembered for his sense of humor. He was a member of the Mid Ohio Model A Club . Gene and Norma had driven the "A" around the track at the Indianapolis 500 and toured Greenfield Village in Dearborn on numerous occasions. He was a former Trustee and head usher at the Caledonia Memorial United Methodist Church. He was also a charter member of the Caledonia Liar's Table. Until recent years Gene and Norma had enjoyed their winter stays together in Florida. Besides his loving wife, Eugene is survived by his son and daughter-in-law Lanny & Robin Showers of Kirkpatrick and his daughter and son-in-law Debbie & Mark Shealy of Bucyrus. His grandchildren are; Brandon Showers of Los Angeles, Courtney Showers of Columbus, Alan Shealy & Brittney Shealy of Bucyrus and Katlan Shealy Columbus. His great grandchildren are Jordan & Aubrie Shealy.of Bucyrus. Gene was preceded in death by his brother Paul Showers and his sister Evelyn Eisele. Funeral Services for Eugene Showers will be held at 11:00 A.M. Tuesday February 26th in the Caledonia Memorial United Methodist Church with Rev. Dr. O. French Ball officiating. Interment will follow in the Caledonia Cemetery. Friends may call at the Timson Allen & Melroy Funeral Home in Caledonia on Monday from 6 - 9. Memorial Contributions may be made to the Trustee Fund of the Caledonia Memorial United Methodist Church.

To order memorial trees or send flowers to the family in memory of Eugene Showers, please visit our flower store.