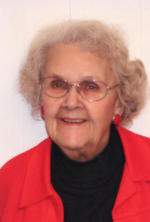 Evelyn Roberta Guinther age 94 of the Martel area passed away Tuesday evening January 25th at her home in Kingston Manor in Marion where she been residing for the past five years. She was born the daughter of the late Dr. James & Carolyn (Edwards) Ruckman in Jenera, Ohio. Her family moved to LaRue during the First World War where her father became the town doctor. Evelyn grew up in LaRue and graduated from LaRue High School in 1934. Immediately upon graduation from Bowling Green State University in 1938 she was hired as a teacher at Martel School and retired from River Valley Schools in 1976. She was a member of the BGSU Alumni Association, the Marion Retired Teachers Association and the Marion Women's Club. She was an avid reader and enjoyed needlework. On May 21st, 1941 she married Cecil D. Guinther. Evelyn and Cecil loved to travel. They had visited Europe, Africa, Canada and throughout the United States. Cecil passed away January 11th, 2006
Evelyn is survived by her two sons and their wives, Ted & Rose Guinther of Galion Caledonia and Wendell & Belinda Guinther. She is also survived by her four grandchildren, Adam Guinther of Marion, Veronica & Scott Schenz of New Winchester, Jason & Annie Guinther of Bucyrus and Andrew & Kathy Guinther of Upper Sandusky.
There are eleven great grandchildren to cherish her memory. She was preceded in death by three brothers and one sister. Graveside Services for Evelyn will be held at 2:30 P.M. on Monday January 31st, in LaRue Cemetery. Friends may call at the Timson Allen & Melroy Funeral Home on Sunday where the family will receive them from 2 - 5 and on Monday from 12:30 - 1:30. Memorial contributions may made to Hospice of Marion General Hospital.

To order memorial trees or send flowers to the family in memory of Evelyn Guinther, please visit our flower store.