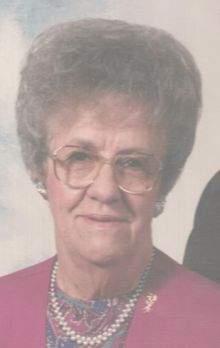 Florence C. Weir, age 89 of Caledonia passed away early Saturday morning August 31st 2013 at Mill Creek Nursing Facility in Galion . She was born in Willard, Ohio on April 17th, 1924 as the daughter of Frank & Lelia Stockmaster. Florence was a 1942 graduate of Willard High School. Florence was a woman of great faith. She was a dedicated member of Memorial United Methodist Church of Caledonia. She was Past Matron of Vera Chapter #64 Order of the Eastern Star in Caledonia where she also served as secretary for many years. She was also a Past District Deputy for the Eastern Star. She was Past Chief of Ester Temple # 90, Pythian Sisters in Caledonia and Past District Deputy for District # 8 of the Pythian Sisters. She was also Past Noble Grand of Rebecca Lodge of I.W.O. F. Caledonia. She also served as Worthy High Priestess of the Marion White Shrine. She served as secretary and treasurer of the Channel Grove Association on Lake Erie. At home she enjoyed growing her fruit trees and gardening. She loved her dogs and cats. Florence was married John R. Weir for 44 years. During their years together they enjoyed traveling throughout the United States and Europe. They spent many days and nights camping with friends. In 1977 Florence & John were given the Distinguished Citizen's Award in Caledonia. John survives her at home. Florence is also survived by her three children, Robert & Karen Weir of Bucyrus, Gary & Stella Weir of Willard and Peggy & Ronny Shawber of Crestline. She had 13 grandchildren, 21 great Grandchildren and 1 great great grandchild. She was preceded in death by her 8 brothers and sisters and her two daughters-in-law; Betty & Joyce Weir whom she dearly loved. Funeral services for Florence will be held at 11:00 A.M. Wednesday September 4th in The Memorial United Methodist Church in Caledonia with Pastor Michael Corwin officiating. Interment will follow in Caledonia Cemetery. Friends may Call at the Timson Allen & Melroy Funeral Home in Caledonia on Tuesday from 2 - 4 and 6 - 9. Eastern Star Services will be observed at the funeral home on Tuesday at 8:30. Memorial Contributions may be made to the American Cancer Society.

To order memorial trees or send flowers to the family in memory of Florence Weir, please visit our flower store.