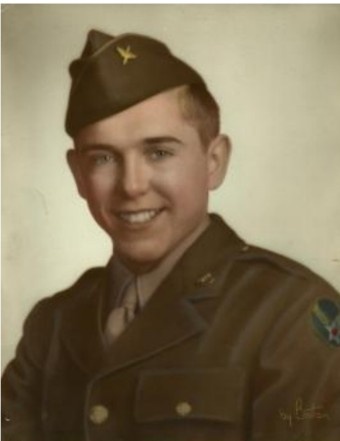 CALEDONIA – Harold (Hal) Garver, age 96, of Caledonia, Ohio, passed away following an extended illness Wednesday afternoon, July 22, 2020, at home, surrounded by his three daughters. Hal was born March 12, 1924, in Marion, Ohio, the son of Albert Asa and Edna Elnora (Lawrence) Garver. He was the youngest of five brothers, Virgil, Lawrence, Albert (Bing), and Richard, all deceased. On November 9, 1946, Harold married Vida Vane (Baker) Garver (deceased) in Cleveland, Ohio. Hal and Vida had been married for 60 years. He would send red roses to her on each anniversary, one for every year that they had been married. The last bouquet was 60 beautiful red roses that filled an entire table in their home! Throughout their lives, Hal's family lived in Larue, Meeker, and Caledonia. He retired from PPG in Crestline, Ohio, having worked for the company for over 30 years. He also was owner of the Norge Village Laundromat in Marion, as well as a small ice cream store, the Freezer Fresh. Hal was a proud 1942 graduate of Marion Harding High School, where he excelled in baseball, basketball and football, and was a member of the Marion Harding High School N.C.O. Championship football team in 1941. He made many lifelong friends along the way, but his best friend in the world, who served as his best man, was the late Owen (Bud) Creasap, who, together, enlisted to serve their country during World War II. Hal was a Tech Sergeant Engineer with the 8th Airforce, Bomber Group, commonly dubbed the "Carpet Baggers" and would enthrall anyone who would listen to his stories. He earned medals that included Bomber Crew Wings and the World War II Caterpillar Club pin that was awarded to those soldiers who jumped out of a disabled airplane. The story about the jump over enemy territory was one that family and friends never tired of hearing! In 2002 he received a certificate of which he was very proud, signed by Gilles Montagnier, Consul General of France, thanking "those glorious veterans" who liberated France. A member of the United Methodist Church in Meeker, he taught Sunday School there for many years, until a move to Caledonia made the trip too far to drive every Sunday. He was also a member of American Legion #584. A lifelong fisherman as well as a dedicated gardener, he passed this passion and skill on to his daughters and grandchildren. He was especially fond of family fishing vacations to Canada. Harold is survived by his three daughters and sons-in-law, Bonnie (Dan) Purdy of Caledonia, Susan (Brad – deceased) Loyer of Caledonia, and Margo (Jimmy) Smith of Nashville, Tennessee. His grandchildren are Brant (Celeste) Ulsh of Cincinnati, Kyna (Pete) Mackey of Amherst, Massachusetts, Kendall (Ashley Dorner) Loyer of Silverdale, Washington, Nathan (Sarah Duplessis) Loyer of Mt. Gilead, Ohio, and Kevin (Meg) Purdy of Marion. Great grandchildren are Eli Ulsh, Griffin Ulsh, Rory Mackey, Danni Mackey, Leo Mackey (deceased), Charlie Mackey, Brynna Purdy and Rhys Purdy. He loved all of the family furbabies and especially enjoyed the daily visits from Thor, who was by his side throughout his illness. The family is holding a private graveside service with military honors at North Canaan Cemetery where Hal will be buried next to his wife of 60 years. Calling hours will not be observed. Memorial contributions may be made to the Morrow County Dog Shelter (Ohio), 115 Young Avenue, US-42, Mt. Gilead, OH 43338, or the National Museum of the Mighty Eighth Air Force, 175 Bourne Avenue, Pooler, GA 31322. Timson & Melroy Funeral Home of Caledonia is assisting the family with arrangements.

To order memorial trees or send flowers to the family in memory of Harold Garver, please visit our flower store.