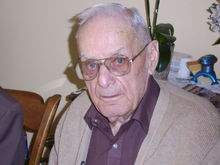 Howard D. McClenathan age 94 of Caledonia, passed away early Monday morning, May 19th 2014 at the home of his son in Canaan Township. Howard was born October 13th, 1919 in Mt. Gilead as the son of the late Odus C. & Marie (Pender) McClenathan Howard was a U.S. Army Air Corp Veteran of World War II and for most of his life he worked as a Farmer. He also sold fertilizer for Marion Plant Life for 10 years. Howard and Pauline had wintered in Florida for the past 30 years at Okeechobee . He was a member of Caledonia Memorial United Methodist Church. On March 26th, 1941 he married the former Pauline Anthony. She preceded him in death on December 5th, 2010. Howard is survived by his son & daughter-in-law Roger & Melody McClenathan of Edison and his daughter and son-in-law Sharon & John Herrod of Mt. Gilead. He is also survived by his grandchildren; Jerry Herrod of Mt. Gilead, Ryan & Cindy McClenathan of Marion and Jennifer McClenathan of Edison. He is also survived by his great grandchildren Hanna & Bailey, D.J. & Maxine, Jaydyn, Bentley & Braigen. He also leaves behind his sister June Lemmel of Ashland. He was preceded in death by his grandson Jeff Herrod, four brothers and one sister. Graveside Funeral Services for Howard will be held 1:00 pm Thursday, May 22nd in Claridon Cemetery. Friends may call at the Timson Allen & Melroy Funeral Home in Caledonia from 4:00 until 7:00 on Wednesday May 21st . Memorial contributions may be made to the Hospice of Marion General Hospital.

To order memorial trees or send flowers to the family in memory of Howard McClenathan, please visit our flower store.