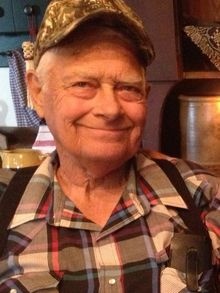 Jack E. Baer age 81 of Tully Twp. passed away Friday morning Feb. 20th at Marion General Hospital. Jack was born on October 7th 1933 in Marion, Ohio as the son of the late Ralph W. & Anna Violet (Oiler) Baer. He was a noted woodworker and enjoyed hunting, fishing and the outdoors. He was a frequent contributor to the Liar's Table at the Camouflage CafAC. and was a faithful member of the Church of Christ. On July 14th 1956, he married the former Shirley Medley and she survives him at home. He is also survived by his children, Jackie (David) Straub, Denise (Mike) Smith and Dennis (Valerie) Baer all of the Marion County area. His grandchildren; Adam (Crystal) Rodgers, Nathan (Lauren) Smith, Lindsay (Tommy) Weston, Whitney (Matthew) Blankenship, Joshua (Stephanie) Baer, Natalie (Scott) Lill and Sarah (Anthony) Scarberry; 16 great grandchildren, a brother; Gerald (Shirley) Baer of Galion, four sisters; Phyllis (Ted) Noggle of Caledonia, Mary (Don) Moorman of Bucyrus, Betty Anthony, Lois Squires of Florida and his loving dog, Star. He was preceded in death by one brother. Services will be conducted Tuesday, February 24th at 10:00AM at the Timson Allen & Melroy Funeral Home in Caledonia. Burial to follow at Caledonia Cemetery. Friends may call at the funeral home on Monday, February 23rd from 6 - 8PM. Memorial contributions may be made to the Kirkpatrick Food Pantry. On line condolences may be expressed to the family at www.timsonallenmelroy.com .

To order memorial trees or send flowers to the family in memory of Jack Baer, please visit our flower store.