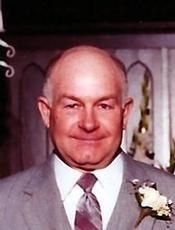 Jesse G. Mowry, age 80 of Caledonia, passed away Monday afternoon May 23rd 2011 at Riverside Methodist Hospital in Columbus. Jesse was born December 17th, 1930 in Woodington, Oh as the son of the late Estell N & Sylvia (Harsh) Mowry. He was a U.S. Army veteran of the Korean Conflict where he received training in the Army Motor Pools which would serve him so well in future years . He was an operating engineer by trade and owned and managed Mowry's Garage in Caledonia after the he moved his family to the community in 1956. He was a member of the Ohio Operating Engineers Local 18. Of all his lifetime activities Jesse will be best remembered for his dedication to the Caledonia Fire Department and later the First Consolidated Fire District which he spearheaded to establish. He served as fire chief from 1959 until 1990. He was responsible for building many of the vehicles that were needed by the fire department in the performance of their duties, including Engine No. 117 which will carry him to his final rest. Jesse also helped in the establishment of the 911 System in Marion County and led the way in the Emergency Medical Technician training program for First Consolidated and many other area departments. Jesse was also a proud member of Oliver Lodge No. 447 F & AM. In 2005 he received the Community Service Award from the Grand Lodge of Ohio for his years of dedicated service to his neighbors. Countless lives have be saved by the actions of Jesse Mowry. In his spare time Jesse enjoyed his garden and loved to rebuild salvaged cars, but he loved his family the most. On January 18, 1954 he married Anna J. Large in Clintwood, VA and she survives him at home. He leaves behind his children, Maxie L. Mowry, Nola J & Calvin Eblin, Julia Mowry , Karen & Erick Baer. His grandchildren include Sean & Stacey Eblin, Jessica & Cory Mowry, Melissa, Ashleigh, Heather, Matthew Baer, Brittanie, Dustin & Derek Parr . Two great grandchildren, Hayden Baer & Alexa Higgins. He will be remembered by his brother J. R. Shahan and his sister Carolyn (Paul) Simon. He was preceded in death by his step-mother Marietta Mowry ,his brother Howard and his sisters Linda Maples and Thelma Norris and his grandson Evan and his daughter-in-law Lorraine Mowry. Funeral Services will be held on Friday May 27th at 1:00 P.M. at the First Consolidated Fire Station Number One in Caledonia with Rev. Terry Cudd officiating. Interment will follow in Caledonia Cemetery with Military honors being provided by the Marion Veterans Council. Friends may call at the Timson Allen & Melroy Funeral Home on Thursday from 2 - 4 and 6 - 9. Masonic services will be observed at 8:30. Memorial Contributions may be made to the 1st Consolidated Fire Department, Oliver Lodge #447 or the charity of the donor's choice.

To order memorial trees or send flowers to the family in memory of Jesse Mowry, please visit our flower store.