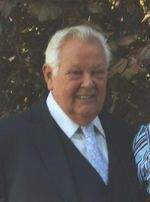 Johnny Burgan, age 68 of Martel , passed away Saturday afternoon September 11th, 2010 in Marion General Hospital . He was born at Cawood, Kentucky September 14th, 1941, the son of the late Henry and Manilla (Sargent) Burgan. On December 29, 1959 he married Etta Ruth Chaffin. She preceded him in death on August 28th, 2009. Johnny retired as a foreman from Gledhill Road Machinery in 2007 and was a member of the Galion Moose Lodge. He enjoyed his time at home with Etta working around the house and in his garden. He will be sadly missed by his sons, Mike Burgan of Virginia, Johnny Jr. (Tina Marie) Burgan of Moyock, NC and Jeff (Julie Rosebrough) Burgan of Caledonia. Eight grandchildren and one great grandchild. He also leaves behind his sister Dixie Grubbs of Cawood, KY. His memory will also be cherished by his brother and sister-in-law Calvin & Jean Hensley of London, KY and his friends Jerry & Laurie Burgan and Dale & Jenny Ebert. He was preceded in death by two brothers. Services for Johnny will be held at the Timson Allen & Melroy Funeral Home on Thursday September 16th, at 11:00 with Pastor Yvonne Hechler officiating . The service will be followed by cremation. Friends may call at the Timson Allen & Melroy Funeral Home in Caledonia on Wednesday from 6 - 8. Memorial Contributions may be made to the Martel United Methodist Church

To order memorial trees or send flowers to the family in memory of Johnny Burgan, please visit our flower store.