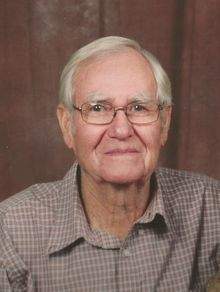 
Marion: Kenneth "Eugene" Longacre, 88 Years old, passed early Wednesday morning, March 25th, after courageously battling a heart ailment. He was in his home, surrounded by his loving wife and children.
Born August 17, 1926, in Caledonia to Kenneth and Elizabeth Coen Longacre
He met his beautiful wife Arlene (McNeil) Longacre, from Green Camp, on a blind date back in 1945. Later, they got married on Easter Sunday March 28th, 1948. Their 67th Wedding Anniversary would have been this Saturday. Out of this union, came 5 children: Linda Camello (deceased), Carolyn Penny, Barb (Frosty) Frizzell, Christine (Michael/Mick) Williams and Jerry Longacre.
Coming from a long line of farmers, Eugene fulfilled his number one passion, farming. It is without debate, that the majority of his life was spent outdoors; performing various tasks such as gardening, growing flowers, bird watching, maintaining his pond, and gathering eggs from his chickens. He was a lifelong member of the Marion County Farm Bureau and the Caledonia Gun Club. During the winters, he had fond memories of past trips with his father, relatives, and friends going fox/deer hunting.
When he wasn't outdoors, he loved going to the Casino with his lucky buckeye! He always kept up with current events by watching the World News, which enhanced his outgoing personality that allowed him to be quite the conversationalist!
When anyone is asked to describe Eugene, the most obvious words to reflect his character, are kind and hard working. Holidays and family celebrations couldn't come soon enough, as spending time with his close family was the personification of value to him.
He had one sibling, Mary Lou Longacre Williams (deceased)
He is survived by 9 grandchildren, Julie Camello, Kevin Camello, Joe (Amy) Eastman, Paula (Chad) Schnitzler, Tim Longacre, Mindy (Aaron) Neiderkohr, Stephanie (Oleg) Longacre, Sarah Longacre and Tony William. He also 9 great grandchildren and 1 on the way.
With much gratitude, the family thanks Marion General Hospital Home Health Care & MGH Hospice as well as a very special thank you to Dr. Vora. Friends may call at the Timson Allen & Melroy Funeral Home in Caledonia on Sunday from 3:00 until 6:00. Memorial Contributions may be made to Hospice of Marion General Hospital.

Mending Wall - Robert Frost
Something there is that doesn't love a wall,
That sends the frozen-ground-swell under it
And spills the upper boulders in the sun,
And makes gaps even two can pass abreast.
The work of hunters is another thing:
I have come after them and made repair
Where they have left not one stone on a stone,
But they would have the rabbit out of hiding,
To please the yelping dogs. The gaps I mean,
No one has seen them made or heard them made,
But at spring mending-time we find them there.
I let my neighbor know beyond the hill;
And on a day we meet to walk the line
And set the wall between us once again.
We keep the wall between us as we go.
To each the boulders that have fallen to each.
And some are loaves and some so nearly balls
We have to use a spell to make them balance:
'Stay where you are until our backs are turned!'
We wear our fingers rough with handling them.
Oh, just another kind of outdoor game,
One on a side. It comes to little more:
There where it is we do not need the wall:
He is all pine and I am apple orchard.
My apple trees will never get across
And eat the cones under his pines, I tell him.
He only says, "Good fences make good neighbors".
Spring is the mischief in me, and I wonder
If I could put a notion in his head:
"Why do they make good neighbors? Isn't it
Where there are cows? But here there are no cows.
Before I built a wall I'd ask to know
What I was walling in or walling out,
And to whom I was like to give offense.
Something there is that doesn't love a wall,
That wants it down." I could say "Elves" to him,
But it's not elves exactly, and I'd rather
He said it for himself. I see him there,
Bringing a stone grasped firmly by the top
In each hand, like an old-stone savage armed.
He moves in darkness as it seems to me,
Not of woods only and the shade of trees.
He will not go behind his father's saying,
And he likes having thought of it so well
He says again, "Good fences make good neighbors."

To order memorial trees or send flowers to the family in memory of Kenneth Longacre, please visit our flower store.