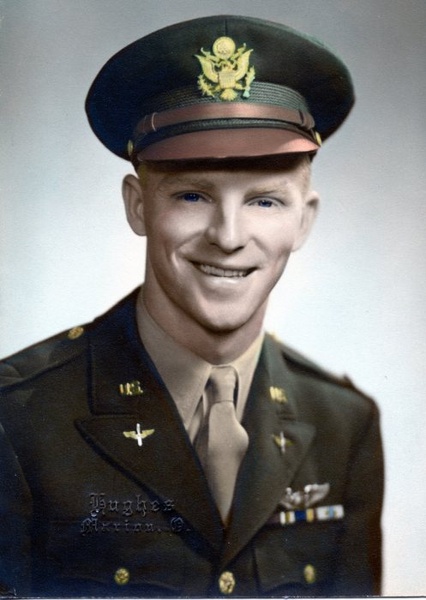 Kensel Edward Clutter, age 100, of Marion County, died May 28, 2020 at Kenton Rehabilitation and Nursing Center of causes related to advanced age. He was born December 31, 1919 at the home of his parents, Paul and Mary Edna (Foos) Clutter, one mile south of Kirkpatrick, Ohio. Kensel was a graduate of Harding High School in 1938, having previously attended school at Claridon, Ohio. In March, 1942 he joined the United States Army Air Force and graduated from flight school as 1st Lieutenant and co-pilot of a B-24 bomber crew. After several missions in the former Gilbert and Marshall Island groups in the South Pacific he was badly wounded in combat and hospitalized in the Hawaiian Islands. After recovering from his injuries he served as Operations Officer at Hilo Air Force Base, Hawaii until he was honorably discharged at the end of the war with the rank of Captain. He received the Purple Heart and the Airman's Metal with Oak Leaf Cluster in recognition of his sacrifice and service. On March 20, 1949 Kensel married Opal Ruthella Schmidt and they bought a farm in Scott Township, Marion County where they have resided for seventy-one years. Kensel was a lifelong active member of the Church of Christ participating in both Kirkpatrick and Mount Gilead, Ohio, as an elder and Bible study teacher. As a young farmer he was a leader in the local 4-H club and was involved with other farm organizations including the Farm Bureau. He became interested in genealogy, researched his ancestry and published several family histories. Using pioneer survey maps he retraced many miles of the old Owl Creek Trail on foot from Wyandot, Ohio to Mt. Vernon, Ohio and wrote an account of his experience. Kensel's largest project was in the identification and preservation of local native prairie areas. This culminated in the production of a large map of and corresponding book on the Sandusky Plains of North Central Ohio. He was an active member of the Marion County Historical Society conducting research on local aviation history, histories of Grand Prairie and Scott townships and Kirkpatrick Village, and Marion County Native American trails. On Jan. 4, 2020 a large group of family and friends gathered at the Family Life Center in Kirkpatrick to celebrate his 100th birthday, a milestone which he very much wished to achieve. In addition to his wife Kensel is survived by two children: Curtis Clutter of Marion County and Janet (Al) Ricketts of near Caledonia, Ohio, four grandchildren and seven great-grandchildren. Also surviving is his sister Geraldine Long of Marion, Ohio. Kensel was preceded in death by his son Roger, and his two brothers: Ivan and Willis. Graveside service for Kensel will be held at Grand Prairie Cemetery on Monday, June 1st at 2:30. In lieu of flowers, memorial Contributions may be made to the Kirkpatrick Church of Christ, 5154 Columbus-Sandusky Rd. N, Marion, Ohio 43302. Services are being arranged by Timson Melroy Funeral Home of Caledonia, Ohio.

To order memorial trees or send flowers to the family in memory of Kensel Clutter, please visit our flower store.