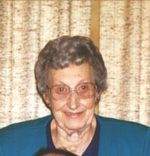 Leola Grace Hissong, age 97 passed away early Monday morning July 27th at The Partners of Marion Care Center. Leola was born June 25th, 1912 to the late Elzie and Effie (Boyer) Stone in Ashland, Ohio. She graduated from Ashland High School in 1930 and on August 24th 1932 she married a schoolmate and neighbor Ermine "EJ" Hissong. During World War II they moved to the Marion area as EJ found employment at the Scioto Ordnance Plant. Leola always thought highly of her hometown of Ashland and spoke of the good times spent there. Leola is survived by three children, Melvin (Doris) Hissong and Ann (Carrol) Tropf, both of Caledonia and David (Martha) Hissong of Centerville. She was preceded in death by two sisters, a brother, two sons as well as her husband in 1997. Leola also leaves behind seven grandchildren; Roger Hissong of Pawtucket RI, Jerry (Peg) Hissong, Douglas Hissong, of Fayetteville, Thomas (Karen) Tropf of North Canton, Marilyn Mulvain of Jackson TN, Alex Hissong of Centerville and Jessica Hissong of Columbus. She had ten great grandchildren. Leola enjoyed children and for many years she worked as secretary at Martel School. She was advisor for the Martel Spool & Spoons 4H Club for several years, Until Recently she was an active member of the Martel United Methodist Church and served in several capacities including the women's group, Sunday School and mission organization. She was also an auxiliary member of Gideons International. EJ and Leola visited the mission field in Haiti, taking their two oldest grandchildren along. They worked in the mission in Saragura, Eqcuador and the Indian Holiness Mission in Arizona. EJ and Leola loved to travel and were past members of the Good Sam Club and with their motor home traveled all over the United States. She loved to fish anywhere but especially Lake Erie. She also enjoyed camping as well as sewing and gardening. She was an avid Ohio State Fan. Besides her family Leola leaves behind her beloved cat Freda. Funeral services for Leola will be held Monday afternoon August 3rd at 2:00 at the Timson Allen & Melroy Funeral Home in Caledonia with Pastor Yvonne Hechler officiating. Interment service will follow in Caledonia Cemetery. Friends may call at the funeral home on Monday from 11:00 until time of service.. Memorial Contributions may be made to the Martel United Methodist Church.

To order memorial trees or send flowers to the family in memory of Leola Hissong, please visit our flower store.