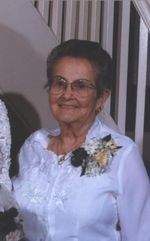 Leona V. Andresz, age 92 of the Caledonia area, passed away Saturday morning October 3rd, 2009 at the home of her daughter Catherine. Leona was born in Marion County July 23, 1917 the daughter of the late Herman and Hazel (Conley) Neville. She was a graduate of Meeker High School and attended Marion Business College. On November 6th, 1942 she married John P. Andresz. He preceded her in death on September 14, 1966. John and Leona were the proprietors of the Duds - N - Suds Laundromat in Caledonia for many years. Leona was also a book keeper for TodCo in Marion for many years. She was a past member of the Caledonia Homemakers Club and used her hobby of collecting and trading coupons to benefit many of the groups that she had belonged to over her life time. Leona is survived by her daughter and son-in-law Cathy & Howard Bard of Marion; Three grandchildren: Toni Scholten of Marion, Nicole Murray of Willowby and Ryan Bard of Delaware and three great grandchildren. She is also survived by her brother Carl Neville of Marion and her sisters Martha Neville of Caledonia and Ruthella Gnagey of Dayton Graveside services will be held Wednesday October 7th at 1:00 P. M. in Grand Prairie Cemetery at Morral. Friends may call on Tuesday from 2 - 4, 7 -9 at the Timson Allen & Melroy Funeral Home in Caledonia. Memorial contributions may be made to the American Cancer Society or Hospice of Heartland.

To order memorial trees or send flowers to the family in memory of Leona Andresz, please visit our flower store.