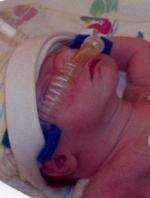 Liam Linville Bailey, infant son of Tyler Burnett and Toni Kay Bailey of the Caledonia area went to play with the Angels on January 19th, 2011 at Marion General Hospital. Besides his parents he leaves behind his big sister Taydem Burnett and his half brother and sister Trace and Audery Burnett. His memory will also be cherished by his Maternal Grandparents Tony & Gina Bailey of Caledonia , his Paternal Grandmother Kimberly Burnett of Galion and his Maternal Great Grandmother Barbara Phillips of Lancaster. Memorial Services for Liam will be held at 8:00 Tuesday evening January 25th at the Timson Allen & Melroy Funeral Home in Caledonia. Friends may call at the funeral home where the family will receive them from 6:00 until the time of service on Tuesday.

To order memorial trees or send flowers to the family in memory of Liam Bailey, please visit our flower store.