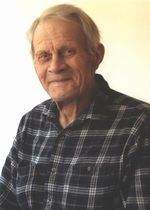 Lloyd Steinhilber, age 84 of Tully Township in Marion Co, passed away Thursday afternoon July 23rd, 2008 at Woodside Village Care Center in Mt. Gilead. Where he had been a resident for the past seven months. Lloyd was born December 5, 1924 in Crawford County, the son of the late Reuben & Mildred (Shifley) Steinhilber. On September 12, 1946 he married his high school sweet heart Thelma M. Hite. She preceded him in death on August 8th, 2003. Lloyd was a 1942 graduate of Mt. Zion High School. He served in the Pacific Theater as a private first class in the U.S. Army where he was awarded a Bronze Star. Lloyd was a farmer for the biggest part of his life but he also worked at the Galion Irons Works for 14 years and operated Steinhilber Dozing Company with his son Larry for five years. In his younger days Lloyd enjoyed playing baseball, riding motorcycles and came close to earning his pilot's license. He also loved to tinker on old farm equipment. Mr. Steinhilber is survived by his son and daughter-in-law Larry & Debbe Steinhilber of Galion and his daughter and son-in-law Carol & Charles Scott also of Galion. Six grandchildren; Joseph (Candi) Scott of Galion, Jason Scott of Marion, Kelly Scott Hoover of Marysville, Eric (Cheryl) Steinhilber of Mansfield, Chad (Malinda) Steinhilber of Marion and Michelle Bollinger of Lexington, Ohio. Eleven Great Grandchildren and his brother Robert of Texas. He was preceded in death by his two sisters Dorothy & Doris Steinhilber and his daughter Doris. Funeral Services will be held Monday July 27th, at 11:00 A. M. At the Timson Allen & Melroy Funeral Home in Caledonia with Pastor Yvonne Hechler officiating. Interment will follow in English Sixteen Cemetery in Whetstone Township. Friends may call at the funeral home on Sunday from 2 - 4 and 6 - 8. Memorial Contributions may be made to the Woodside Village Activity Fund.

To order memorial trees or send flowers to the family in memory of Lloyd Steinhilber, please visit our flower store.