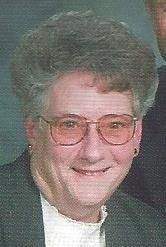 
Lois Marie Farrow passed away November 23, 2013 at Fairhaven Community in Upper Sandusky. Lois was born on June 2, 1928 in Cardington, Ohio to the late Edward and Blanche (Bollinger) Swisher. She graduated from Cardington High School, and upon graduation worked at the GE plant in Bucyrus. It was there that she met Robey Edward Farrow, with whom she subsequently fell in love. Lois and Robey married on November 10, 1950 and celebrated 56 wedding anniversaries prior to his passing on June 9, 2007.
In addition to Robey, Lois was preceded in death by her beloved son, Ronald Edward Farrow, and infant great-grandson, Grayson James Espenschied; brothers Darryl, Donald, Jim, Marion and Virgil Swisher; and sisters Leontine Crampton, Ginny Lucas, Sylvia Magill and Maxine See. Left to cherish her memory are loving daughters and their families Judy (Mark) Conrad of Tuscarawas, Diane (Henry) Weaver of Marseilles, Sharon (John) Swinehart of Sunbury; daughter-in-law Terri Farrow of Bucyrus; grandchildren Jessica (Joshua) Scott of Bucyrus, Ryan Farrow of Hilliard, Derek (Lindsay) Conrad of Tuscarawas, Mychal Conrad and Jacylyn Taylor of Canal Fulton, and Kelly (Derick) Espenschied of Amherst, and great-grandchildren Sarah and Hannah Scott, Jordan and Ava Conrad, and Dylan Espenschied.
Lois was a homemaker and stay-at-home mother until her youngest daughter graduated from high school; thereafter, Lois enjoyed working at Wiant's book and gift store in Marion until she retired. Through their married life, she and Robey lived in the Bucyrus, Eden Township, Harpster, and Edison, Ohio areas. They were long-time members of Salem United Methodist Church in Eden Township and then Caledonia United Methodist Church.
In their spare time and after retirement, Lois and Robey enjoyed fishing, camping, gardening, playing cards and spending time with their family. Lois also enjoyed crocheting and sewing. Her family has many happy memories of Lois' "let's get in the car and go" spirit, day-after-Christmas shopping trips, and Memorial and Labor Day mini-vacations at Dillon Lake. Lois' greatest legacies will be the love she had for her family and the fact that she was a wonderful wife and mother.
Funeral services will be held at 11:00 A.M. Tuesday November 26th at The Timson Allen & Melroy Funeral Home in Caledonia. Internment will follow in Caledonia Cemetery. Friends may call at the Funeral Home on Monday between the hours of 6:00 and 8:00 P. M. and for one hour prior to the service. Memorial contributions may be made to Memorial United Methodist Church of Caledonia or Fairhaven Community. The family would like to thank the staff at Fairhaven Community in Upper Sandusky for the loving and tender care and support to Lois during her time there.

To order memorial trees or send flowers to the family in memory of Lois Farrow, please visit our flower store.