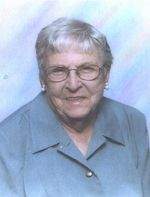 Martha Ruth Winters age 87 formerly of Caledonia passed away Wednesday evening January 13th, 2010 in Heartland of Marion. She had been in failing health for the past few years. She was born in Caledonia on September 24th, 1922 the daughter of the late William R. & Iva (Everett) Bayles. On June 3rd 1966 she married O. Eugene "Sonny" Winters. He preceded her in death on October 18th, 2005. Martha was noted for being a good cook and was well know around Caledonia for the candy she made at Christmas time. But looking after her children and grandchildren was what she loved most. Those left behind to cherish her memory include her son and daughter-in-law Craig & Penny Woodrum of Marion: Her daughters and sons-in-law Barbara & Steve Reed of Florida, Janice & Ray Kinney of Bolivar Ohio, Jackie & Jerry Ward of Waldo and Ann Cartee of Florida. She also leaves behind fourteen grandchildren and twenty-two great grandchildren. She was preceded in death by three brothers and two sisters.
Funeral Services for Mrs. Winters will be held on Saturday January 16th, 2010 at 10:30 in the Timson Allen & Melroy Funeral Home in Caledonia with Pastor Steven Roper officiating. Interment will follow in Caledonia Cemetery. Friends may call at the funeral home on Friday from 6 - 8. Memorial contributions may be made to the charity of the donor's choice.

To order memorial trees or send flowers to the family in memory of Martha Winters, please visit our flower store.