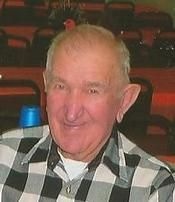 Ralph E. Boger, age 89 of Caledonia passed away on Friday, August 26th at home. Ralph was born August 15th 1922 in Westfield as the son of the late Mannas & Caroline (Roth) Boger. He joined the Merchant Marines during World War II and bought his farm on Whetstone River Road when he returned. He has farmed that property since then. He became a Claridon Township Trustee in 1973 and served in that position for many years. Ralph is survived by his daughter Lee Harmon and her husband Marc Tarplee of Rock Hill SC and two granddaughters; Austin Harmon of Rock Hill and Marley Harmon of Boston, MA. Additionally, he is survived by his sisters Maxine Cover and Margaret Brandes of Marion and Flo (Ernie Heimlich) Gray of Caledonia. He is also survived by his brother John (Judy) Boger of Caledonia. Sisters-in-law include Marcia Boger of Delaware and Alta Boger of Kenton. He also leaves behind many friends, nieces , nephews and cousins including the special caregiver family of Rusty, Sandy, Jared and Shelby Boger of Caledonia. Ralph was preceded in death by six brothers; Carl, Lowell, Robert, Leroy, Walter, Donald and two sisters Jane Haycock and Mildred Shoemaker. Funeral services for Ralph will be held on Friday September 2nd. 2011 at 10:00 A.M. in the Caledonia Memorial United Methodist Church with Rev. Dr. O. French Ball officiating. Interment will follow in Marion Cemetery. Friends may call at the Timson Allen & Melroy Funeral Home on Thursday from 2-4 and 7-9. Memorial Contributions may be made to Marion General Hospital, Hospice, the Caledonia Memorial United Methodist Church or the charity of the donor's choice.

To order memorial trees or send flowers to the family in memory of Ralph Boger, please visit our flower store.