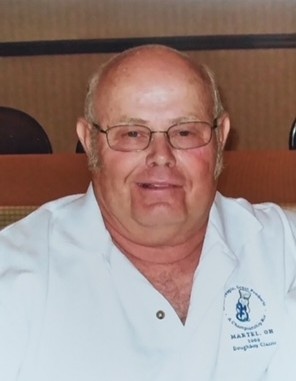 Ronald "Ronnie" Lee Wilson, age 82 of Martel died September 21, 2021 in Crestwood Care Center in Shelby, Ohio. He was born December 31, 1938 in Galion, Ohio to the late Kenneth and Eunice (Rorick) Wilson. Ronnie married Janet (Goken) September 20, 1959 in Caledonia, Ohio and she preceded him in death September 20, 2010. Ronnie loved to play golf and cards, especially Euchre and solitaire. He also enjoyed working puzzles, the Cleveland Indians, and college football. Most of all, Ronnie loved his family and spending time with them. Ronnie is survived by his children; Brian (Deborah) Wilson, Kristy (Jerry) Baldinger and his four grandchildren; Kenny Wilson, Brandon Wilson, Gary (Rebekah) Baldinger, Jill (Jerrid) Schultz and his furbuddy Fluffy. Ronnie is preceded in death by his brother, Robert and sister-in-law, Emma. Visitation for Ronnie will be held from 4-7 PM Sunday, September 26, 2021 at the Timson and Melroy Funeral Home. Funeral Service will be on Monday, September 27th at 11:00 AM at the funeral home with Pastor Ray LaSalle officiating, interment to follow in Caledonia Cemetery. Memorial Contributions may be made in Ronnie's memory to Kindred Hospice, 1025 Harding Memorial Pkwy., Marion, Ohio 43302.

To order memorial trees or send flowers to the family in memory of Ronald "Ronnie" Wilson, please visit our flower store.