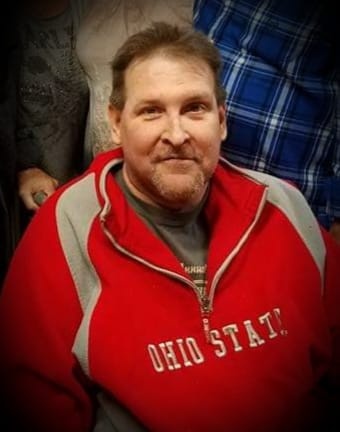 
R. Scott Vaughn, age 57 of Marion, passed away Monday morning, February 25th, 2019 in the Ohio State University Burn Center as a result of injuries received in a house fire. Scott was born May 26th, 1961 in Marion as the son of Barry Vaughn of Caledonia and the late Mildred "Midge" Roesch - Vaughn. Scott was a 1979 graduate of River Valley High School and was previously employed as the shipping Manager for Bauer - Meister Coffee Machinery Producers. He was a member of the Caledonia Church of Christ. He loved sports and was so good at statistics, that the family claimed he could rival Howard Kossel. His "teams" were the Reds, Buckeyes and Bengals. Before his accident in 2001 that left him a paraplegic, Scott enjoyed playing in softball leagues and other local sporting activities. Scott will be remembered by many, but especially his family. Besides his father Barry, he leaves behind his Son Scott Vaughn of Marion, and his daughter-in-law Katherine Vaughn of Denham Springs, Louisiana; His brother Robin (Jackie) Vaughn of Caledonia and his sisters; Cathy (Ralph) Stayner of Edison and Shannon Vaughn of Caledonia. Scott especially loved his grandchildren Kearsten Nichole Vaughn, Kaiden Scott Vaughn and Nathaniel Vaughn and his Health Care family Jamie, Lisa, Martha & Christina, as well as all of their children. Scott was preceded in death by his mother, his son Jordan, brother Jerry and sister Jeanie. Funeral services for Scott Vaughn will be held on Friday, March 1st at 11:00 A.M. in the Timson & Melroy Funeral Home in Caledonia with David Braxton officiating. Interment will follow in Caledonia Cemetery. Friends may call at the funeral home on Thursday where the family will receive them between 4:00 and 8:00. Charitable Contributions may be made in Scott's memory to the Christopher & Dana Reeves Foundation. 636 Morris Turnpike, Suite 3A Short Hills, NJ 07078.

To order memorial trees or send flowers to the family in memory of R. Scott Vaughn, please visit our flower store.