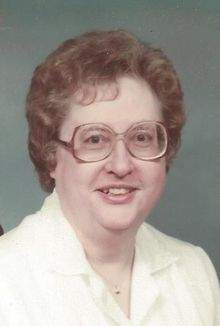 Ruth E. Cochran age 84 a resident in Kingston of Marion passed away Thursday morning February 13th. 2014. Ruth was born June 07th, 1929 in Carrollton, Ohio as the daughter of the late Harry & Blanche (Simonds) Roach. She was a 1948 graduate of Carrollton High School and earlier in life had worked at Gallagher's Drug Store in Marion and at the Marion Children's Home. In her spare time Ruth had compiled an extensive family genealogy. On September 11th, 1952 she married Blaine R. Cochran. He preceded her in death on November 3rd, 2013. Ruth is survived by her two sons, Blaine Cochran and his wife Janet of Edison and Michael Cochran of Latrobe, PA. Ruth was the last of a family of six sons and four daughters. Graveside services for Ruth will be conducted at 2:00 Monday February 17th in Caledonia Cemetery. Friends may call at the funeral home on Monday from 1:00 until 1:45 where the family will receive them. Memorial Contributions may be made to Disabled Veterans of America or Acclaim Hospice. The Cochran
Family wishes to extend their thanks to Kingston and Acclaim Hospice for their kindness' shown to their mother in her last days.

To order memorial trees or send flowers to the family in memory of Ruth Cochran, please visit our flower store.