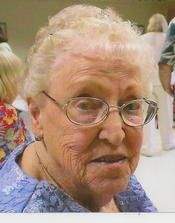 Shirley Mae Medley age 86 of Marion , passed away Friday morning November 25th, 2011 in Heartland of Marion where she had been a resident for seven years. She was born June 19th 1925 in Portsmouth, Ohio as the daughter of the late Fred & Clara Mae (Rollins) Bender. On October 20th 1945 she married Howard Medley in Green-up, KY. He preceded her in death in June 1983. Shirley ran a Beauty parlor in Caledonia for many years. She was a faithful member of Fair Park Baptist Church where she ran the Clothing Locker and looked after the Church Newsletter for many years. Shirley is survived by her two sons, Larry (Sheila French) Medley of Marion and Steven (Gracie) Medley of Ashley. Five grandchildren and Thirteen great grandchildren. . She is also survived by her sister Grace Thorton of Mason WV. She will be sadly missed by her special caregiver Kathy Medley. She was preceded in death by her son Richard Lee Medley, two brothers and a sister.
Funeral Services for Shirley will be held at 11:00 A. M. Monday November 28th, 2011 at the Timson Allen & Melroy Funeral Home in Caledonia. Interment will follow in Caledonia Cemetery. Friends may call at Funeral Home on Sunday from 6:00 until 9:00 . Memorial contribution may be made to Hospice of Heartland. On Line Condolences may be expressed to the family at www.timsonallenmelroy.com .

To order memorial trees or send flowers to the family in memory of Shirley Medley, please visit our flower store.