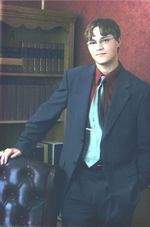 Stephen Edward Melroy age 23 of Caledonia, died in a Highway accident on Tuesday afternoon June 8th, 2010 north of Caledonia. Stephen was born in Marion on July 14th, 1986 the son of Mark A. & Diana (Cook) Melroy. Stephen was a 2005 graduate of River Valley High School and of North Central State College with a degree in Drafting & Design. He became a drummer at the age of ten with the 121st Ohio Volunteers and loved to play a variety of instruments including the concertina and the harmonica. Stephen had traveled throughout the United States and Great Britain and enjoyed seeing new things. While waiting for that elusive first job, Stephen had worked as a grounds keeper for Claridon Township Cemeteries and helped his dad out around the funeral home. Besides his parents, Stephen leaves behind his Grandmothers; Suzann Melroy & Sally Cook, both of Tiffin. He is also survived by his uncles and aunts; Scott & Janeen Melroy of Bloomville, Carol Taylor of Melmore, Jim & Sue Cook of Sycamore, David & Shielena Cook of Canal Winchester, Tom & Debra Cook of Bloomville, Linda & Tim Fritsch of Swanton. And a boat load of cousins. He also leaves behind the love of his life, Callie Bramel. He was preceded in death by his grandfathers; Dick E. Melroy and Robert N. Cook. A private Family Service will be held at the Timson Allen & Melroy Funeral Home on Saturday morning with Pastor J. Randy Kiel officiating. Friends may call at the funeral home on Friday from 1 - 4 and 6 - 9. Memorial Contribution in Stephen's name may be made to the Columbus Masonic Learning Center for Children 290 Cramer Creek Court, Dublin, OH 43017

To order memorial trees or send flowers to the family in memory of Stephen Melroy, please visit our flower store.