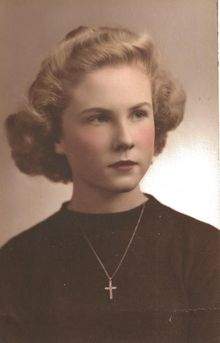 Verlyn Jean Lemke age 87 of Marion passed away Tuesday morning March 24th 2015 at her home. She was born on October 27th, 1927 in Marion as the daughter of Clifford J & Alice M. (Deal ) Hickman. Jean was an able worker on the farm and had been a substitute bus driver for Ridgedale Schools, but her favorite job was being a mom and a grandmother. Jean is survived by her daughter and son - in - law Jill & Michael Thibaut of Marion and three grandchildren, Chuck Thibaut, Jolene Selwa and Jaclyn Lemke. She was preceded in death by her sons Michael & Rick Lemke, her sister Enid Burris and her brother Murrill T. Hickman, A graveside inurnment will be held at Grand Prairie Cemetery on Monday at 11:00. Memorial Contributions may be made to the Alzheimer's Association.

To order memorial trees or send flowers to the family in memory of Verlyn Lemke, please visit our flower store.