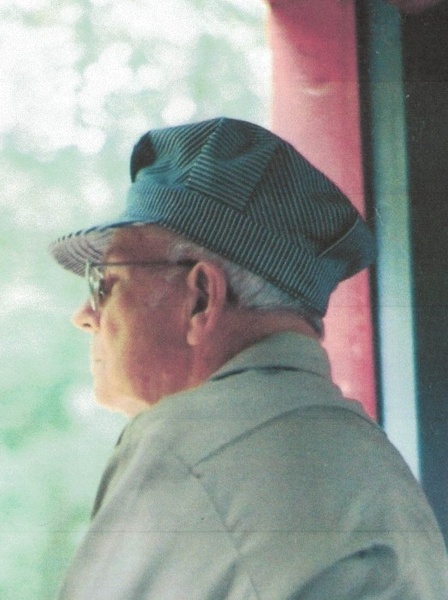 Winton P. Arnold age 101 of Caledonia passed away Friday evening December 4, 2015. Winton was born December 31st, 1913 in Wayne County, Ohio as the son of the late Ralph W. & Vira M. (Gault) Arnold. Winton was a 1932 graduate of Polk High School. He started working for Erie Railroad in 1932, just six days after graduation and retired in 1976 after numerous positions with Erie-Lackawanna and ConRail. Lived in Kent, Ohio for 20 years and moved to the Caledonia area in 1964. He was a faithful member of the Caledonia Memorial United Methodist Church. A past master of Oliver Lodge No. 447 F&AM., 32nd degree Mason, Scottish Rite - Valley of Columbus and past worthy patron Vera Chapter No. 64 O.E.S He was inducted as first Centenarian in the Ohio Genealogical Society in 2014 and was a member of First Families of Ashland County. He was also the oldest living alumni of Polk High School and former alumni president. Working with wood was a favorite past time of Winton's, as he had built their home in Kent by himself and finished the interior of their present home. He also enjoyed building grandfather clocks and built more than 40 through the years. On February 1st 1935 he married Dolores Gray and they had just celebrated their 80th wedding anniversary. Besides his wife he is survived by a son and daughter in law, Mark and Kristine Arnold of Caledonia, two grandsons, Scott (Cheryl) Martin of Lawrenceville, GA and Steven Martin in Thailand, great grandson Gregory Winton Martin, two sisters, Portia Gribben of Ashland and Carolyn Sweet of Polk. Winton was preceded in death by their daughter Patricia Martin in 1967, two brothers, James and Richard Arnold, three sisters, Monica Kohler, Virginia Plank and Donna Conwell. Winton was also preceded by his 2nd mother Erma Arnold who was a great influence on his life and raised him to manhood. Funeral Services will be held at 10:30AM Tuesday December 8th at the Timson Allen & Melroy Funeral Home with Rev. Daniel Johnson officiating. Interment will follow in Caledonia Cemetery. Friends may call at the funeral home Monday December 7th from 4-8 PM. Masonic Service will be held by the Oliver Lodge No.447 at 6:00PM at the funeral home. Memorial contributions may be made to the Trustees of Memorial United Methodist Church.

To order memorial trees or send flowers to the family in memory of Winton Arnold, please visit our flower store.