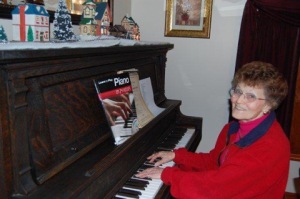 Bernadette June Kuchenberg, age 95, passed away April 23 at DeWolfe Place in Marion, Ohio.  She was born May 31, 1924 in Independence, Iowa as the daughter of Ira John Clue and Grace Imogene Clue.  She met Eugene Klenzman at the Ballroom in Crystal Lake, Iowa and they were married April 15, 1946. They were married for 31 years until his passing on May 31, 1977. Later, Bernadette married Clair Kuchenberg, her school-age sweetheart, October 6, 1979 and remained married until his passing on August 30, 1986.

Bernadette was a big sports fan. She followed Ohio State, Cleveland Browns, Cincinnati Reds and Cleveland Indians. In her younger years, she played baseball and faithfully attended her son’s ball games from junior high through senior softball. She attended one to three ball games a week most summers.   Bernadette’s other passion was music. She played in a drum and bugle group, loved to dance, played guitar and piano. She would sing Karaoke to midnight if she could get her children to stay up that late. Bernadette occasionally played piano and yodeled a few songs at DeWolfe Place.  She would play table games and euchre as late as anyone wanted to play. Dette loved outdoor activities such as fishing and yard work. She would carry tools in the trunk of her car in case her children’s yards needed a quick trim. She loved to travel with her children and in her later years enjoyed golf and gambling with her best navigator and companion, Doris Rinehart. They hit many casinos from Las Vegas to Atlantic City and a five-state region.  Dette attended Trinity Baptist and Dayspring Wesleyan churches in Marion.

Special thanks to the staff at DeWolfe Place and Kindred Hospice for the excellent care given to Bernadette.  In keeping with the family's wishes, there will be no public services. Memorial contributions in Bernadette’s name can be mailed to Kindred Hospice at 1199 Delaware Ave. Suite 102A, Marion or to Marion Senior Softball Association of the Marion City Recreation Department.

To send flowers to the family or plant a tree in memory of Bernadette June (Clue) Klenzman Kuchenberg, please visit our floral store.

You can still show your support by sending flowers directly to the family, or by planting a memorial tree in the memory of Bernadette June (Clue) Klenzman Kuchenberg